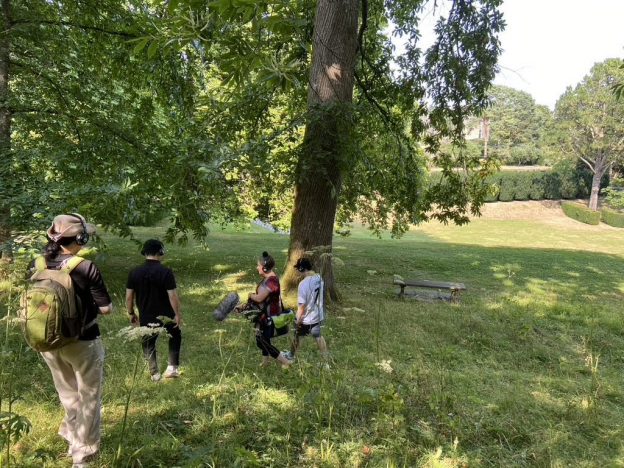 The UK research workshops for the UK / South Korean, interdisciplinary research network, Ecotones: Soundscapes of Trees, led by Professor Amanda Bayley (funded by the ESRC/AHRC), were launched at Dartington, Devon, to coincide with World Listening Day on 18 July. Listening walks were led by sound artist, Kathy Hinde, which you can read about it in her blog.

Over the following two days at Dartington, themes for the network focused on Nature’s ensemble, eco-creativity, and eco-literacy. Participatory listening and performing workshops of the Ecotones Ensemble, led by composer/performer Stevie Wishart and composer/ taegŭm (Korean flute) player Hyelim Kim, were a feature of each of the locations between 18 and 26 July, responding to sounds in nature.

The first activities of the network took place in South Korea from 30 April to 10 May 2022 when Amanda and Dr Samantha Walton (together with three other researchers from the UK) attended the World Forestry Congress in Seoul, co-organised by Professor Won Sop Shin (Chungbuk National University, and Chair of the Korea Forest Therapy Forum). A two-day workshop at the National Forest Healing Center, Yeongju, included themes on growing music, human health and forest health. Details of these and of the online workshops can be found on the Ecotones Storymap.