Walking across the lawn, we looked around for the two old chestnut trees we were told would be in bloom now and should act as marshals. After scanning inquisitively we found them; twins of the arbour community, top-heavy and wild-haired, their ivory catkins dangling. They were, indeed, true guides and we found ourselves at the bottom of the concrete steps leading to the conference building and so headed inside.
Although not particularly striking from the outside, once indoors and having ascended to the fourth floor, I realised the design of the building was somewhat like a tree-house. Cylindrical in structure, the rooms were placed centrally at the core, radiating out, surrounded by a wide wooden platform, glossed the colour of buttermilk. Above this, around the circular edge, unfussy, clean-lined oblong windows looked out over the campus; Scandinavian blue summer skies spied atop thick foliage, despite only being May.

It had been a few months previous, back in the midst of a UK winter- when the Sun seems to have abandoned those of us in the Northern worlds- when three of us, as Environmental Humanities students, had been given the opportunity to attend the conference. Entitled ‘Deep Time and Deep Water- Water as a Being’, it aimed to bring people together from different disciplines to discuss the impact of humanity on life on the planet, specifically drawing out our relations with water, elucidated through the lens of ecology, religion and personhood. It further served to inaugurate the upcoming taught PhD programme which officially begins at Stockholm University in October as well as, more generally, explore and encourage collaborative endeavours across institutions and cultures, an aim suffused throughout the GALA network.
As I take a seat, the exterior cocoon of trees called to mind some scientific research I had recently read about the benefits of walking in the forest. It suggested that aromatic compounds released by plants, called phytonides, boost the immune system and that, in contrast to walking in urban areas, walking beneath wooded canopies tends to lower adrenaline as well as increase serum adiponectin, inducing a calm nervous system. I was intrigued by such invisible, microscopic intimacy. Interspersed with this, memories of a vivid documentary peppered my thoughts, where the lives of trees were investigated. Nicknamed the ‘wood wide web’, intricate time-lapse photography captured diminutive multitudes of fibrous fungal networks whereby trees shared nutrients with less healthy trees, sent chemical signals to other plants about insect attacks and even transferred carbon between themselves.

People trickle in, pooling together amiably with people they are familiar with and one of the speakers, the geologist Dan Hikuroa, is asked to begin proceedings in his traditional Maori way. He responds with a method of engagement which reaches out rather than down, despite his towering presence, asking each of us to introduce ourselves; first with our place of origin, including our landscape, then our interests in the conference and lastly our name. When he introduces himself he states first the rivers he is from, followed by his people and lastly his name, explaining that he is the least important of all these things. Adapted from the traditional Whakapapa, or recitation of a Maori’s genealogy, the order of Being is reflected in their words and syntax; the individual human (way of) Being reflected as emerging from, and belonging to, the earth and older forms of life, not the other way around. They endure beyond our individual agency and place us inside a wider context.

I listen with interest to the many other voices and stories of different landscapes and waterscapes, of people coming from, moving to and settling in, and I reflect upon my own situated heritage; a place I have often referred to as being in the middle of everywhere and nowhere simultaneously. Its Northern agricultural landscape, bleached over time by the necessity to feed the swelling urban population during the Industrial Revolution, must have once been a quiet corner of Europe. And then, rather abruptly, it became an opened portal to the rest of the world- a portal to places that seemed to echo from afar even in their very naming. India. Africa. The Americas. Shaping and shaped quite strongly by harsh material conditions, the local communities based on mining and cotton factories where at least half the population for generations rarely saw daylight and the other half worked building ships to transport slaves, the area was imbued with politics and a long history of good to ‘goods’- both human and non-human. It took its toll. And I often felt alienation caroused the area, gin in hand, loud and aggressive, perhaps defensive, around my hushed home. Claudia Egerer, who jointly organised the conference, interrupts my thoughts, introducing her family’s long philosophy of ‘boots not roots’ and I smile in recognition, contemplating if this is perhaps more typical of people who come from poor soils where growing shoots struggle to take hold and where one’s individual name comes first, stuck out on a lonely limb, rather than embedded in one’s environment. Or perhaps, I counter, it is merely a way to reconnect to our ancestors’ more nomadic ways…
Dr Hirokua, stands again to begin his presentation, and evokes his place with vibrant presence, affirming that his sacred waters greet our sacred waters, his sacred mountains greet our sacred mountains and that the indigenous people of his land greet the indigenous people of Sweden, the Saami. Far from any mere backgrounding, his land is evoked as having a voice, a presence and, touchingly, a spirit of welcome. And it sets the tone for the rest of the conference where many interesting debates bubble up in a space where people are encouraged to participate and share their reflections; a space of multiple human voices as well as discussions of how to incorporate and hear what the non-human voices are saying as well. In his presentation, ‘ Te Mana o te Wai’ or ‘The charisma of water’, questions arise of how to read the state of the waterways, as they speak of pollution and stagnation, and of the significance of reframing issues and asking ‘what would the river say?’ or ‘what is it saying?’. He spoke of how some waterways, such as the Ganges, have been granted personhood but that the structure of this is still a legal framework based on the rights paradigm. Founded in 19th century property rights which are, in turn, based on a dualistic understanding of the world, it is predisposed towards competition and contest. An alternative, he proposes, is a voice paradigm, where everyone- humans, rivers, animals and plants, amongst others- are invited to speak their reality; reversing the process of commodity back to kin with a recognition of multiple, valid and interconnected perspectives.
The theme was carried over into Kate Rigby’s engaging presentation as the place of humanity in the world was reinterpreted and re-read through the meandering stories of Christianity. In the Beginning may have been the ‘Word’ but picking through the etymology of the ‘Word’ with its origins in the Greek ‘Logos’ we journeyed back to the earlier stories where this ‘Logos’ or ‘divine reason’ and ‘creative order’ was in and through all things in the Bible and yet now covered over with layers of sedimentary time. Similarly, in the Hebrew Bible, in the Beginning was not the Word but ‘the Waters… and the Waters were deep’. The Earth was chaos and Elohim, a reference to God but, surprisingly, in plural form, vibrated on the face of the waters. Reconnecting Christianity to older beliefs of personhood pervading the natural world, we heard how Process Theologians today understand the process of generating life as itself divine. Could it be we are simply one author in the wider web of life which also has its stories and various ways of knowing and communicating? Do we need to look again at the meaning of ‘uni-verse’ and understand it is a process of multiple songs that intersect -like those childhood rounds which sometimes created beautiful harmonies and sometimes jarred in tonal clashes, only to be resolved at the end…And will this clash be resolved?

Tired but inspired, after a full day of thought-provoking conversations and presentations, we returned to our rented accommodation, just a 30 minute bus ride from Stockholm city centre. It was a traditional Swedish-style house, its white wooden frame sitting on a small rocky outcrop with winding, crooked steps up to a dark navy door. A piece of blue fisherman’s rope was hooped over a freely-swinging gate and when we found no-one at home, the neighbour informed us that the front door key was hidden under the green velvet cushion in the porch. Despite situated in a northerly climate, it had two verandas on the upper floor drawing us imperceptibly outside in the evening to read. The back garden intrigued me the most, though; a sparsely wooded area with no fences or barriers between the houses, people having merely mentally carved-out their niche. Some had BBQs tucked away near their side wall, others had planted a bush which gently portioned off the far end and someone had put mini goal posts on the flattest, most central part of the area. Apart from its whisper of socialism, it was at night that the wider significance of this became known. Sitting having dinner, the lilac light of dusk lingering like a mother who won’t leave, we suddenly see a large deer gracefully wandering through the garden, foraging on some of the bushes as if on canapés at a garden party. We stand poised looking through the glass of the floor-to-ceiling window, just watching, as almost as silently as he arrives, he disappears, off into the trees on the other side of the dell, milky twilight dissolving his form.
Two owls hoot softly in synchronised stereo and I wonder again at what might be possible if only we were to give space and place to the multiplicities of form and knowledge enacted in our presence. What might it be like to hear again the larger burbling channel of communication flowing around us and understand we are one part of Life, in dialogue with itself. 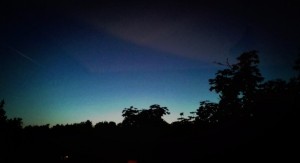